You are here:Home›Resources ›Sustaining the HIV/AIDS Response in St. Lucia: Investment Case Brief 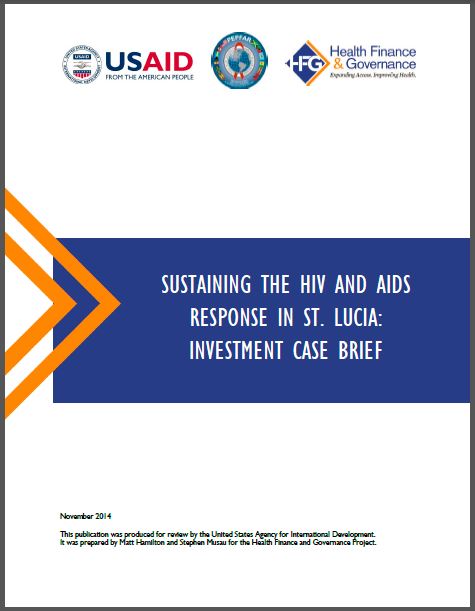 The HIV prevalence in St. Lucia is estimated at 0.58%1 based on reports from public and private laboratories on clients tested. This estimate is very likely an understatement given that some who engage in risky behavior do not go for testing and others also choose to be tested outside the country for fear of breaches of confidentiality. The epidemic is concentrated among the most at risk groups including men who have sex with men (MSM), commercial sex workers (CSW), and other groups including prisoners and drug users.

The HIV and AIDS response consists of prevention activities that have been mostly provided through non-governmental organizations and care and treatment provided mostly by the Ministry of Health (MoH). Prevention among most-at-risk populations (MARPS) was mainly provided by the President’s Emergency Plan for AIDS Relief (PEPFAR)-funded Eastern Caribbean Community Action Program (EC CAP II), implemented by the Caribbean HIV/AIDS Alliance (CHAA) whose program ended in September 2014.

The MoH’s care and treatment program is decentralized among several hospitals. However the process of decentralization and integration of HIV and AIDS services into general primary care and into the private sector has been slow. The HIV/AIDS program has also been constrained by lack of reliable data. Behavioral surveys have not been conducted recently and hence the extent of HIV prevalence among key risk groups has not been easy to estimate. Other challenges include: the National HIV and AIDS Policy and Strategic Plan are still in draft form; uncertainty about sustainability of treatment care and support to PLHIV given decreasing donor funds; constraints with linkage to care after diagnosis and loss to follow up; costly access to viral load and genotype testing; increasing cost of ART coverage for government due to expanding patient volume as patients on ART live longer with the disease; punitive laws and practices around HIV transmission, sex work, drug use, buggery; and weak HIV governance structures.