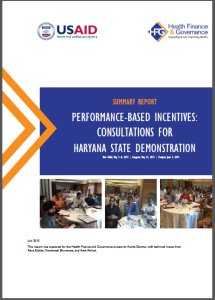 The government of the northern Indian state of Haryana has evinced strong interest in adopting a PBI scheme to improve primary health care services in the state. To this end, in December 2014 the HFG project conducted a qualitative investigation in two blocks of Haryana (Nuh block, Mewat district, and Rai block, Sonipat district) to examine the existing incentive and operating environments, assess whether performance incentives would be motivating to facility staff and supervisors, and inform the design of a PBI scheme for demonstration in the two study blocks.

As the next step toward defining the PBI scheme framework, a series of consultative workshops were conducted to generate discussion and garner views and ideas on the different design elements of the PBI scheme. Departing from the conventional top-down approach, the consultative workshops sought to engage field-level health workers and other stakeholders in deliberations on intervention design and facilitated open and frank discussion and feedback sharing. Consultations on PBI design were thus spread across three workshops – a two-day national-level workshop held in New Delhi on May 7–8, 2015; a one-day block-level workshop for Nuh (Mewat), held in Gurgaon on May 23; and a one-day block-level workshop for Rai (Sonipat), held in Panipat on June 3. These workshops engaged different stakeholders in discussion and deliberation on the design of the PBI intervention that could be implemented in Haryana under the aegis of the National Health Mission (NHM).