You are here:Home›Resources ›Entomological Monitoring, Environmental Compliance, and Vector Control Capacity for the Prevention of Zika and Other Arboviruses: Guatemala Assessment Report 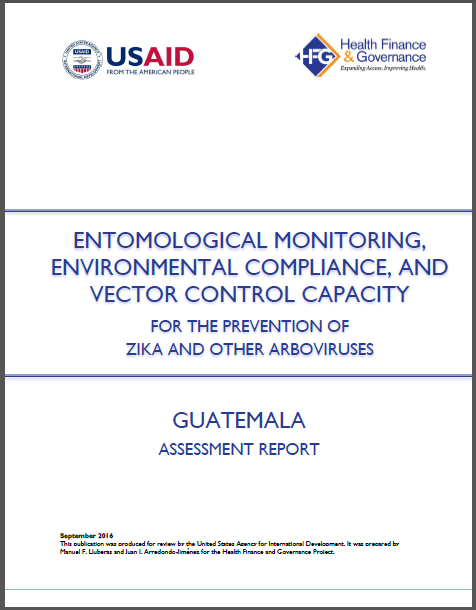 The first case of local, vector-borne transmission of the Zika virus in the Americas was identified in May 2015 in Brazil. By July 2016, the virus had spread to nearly all Zika-suitable transmission zones in the Americas, including the majority of countries and territories in the Latin America and the Caribbean region. Governments in the region face a formidable challenge to minimize Zika transmission and limit the impact of Zika on their populations.

The United States Agency for International Development (USAID) supports efforts to strengthen the region’s Zika response through targeted technical assistance, stakeholder coordination, and implementation of key interventions. In Guatemala, the USAID-funded Health Finance and Governance project assessed country capacity to conduct vector control and entomological monitoring of Aedes mosquitoes, the primary vector of the virus. The assessment was conducted from July 11 to July 21, 2016, and sought to gauge current capacities, identify strengths and weaknesses in these capacities, and recommend countermeasures, i.e., specific strategies to minimize the impact of Zika virus transmission.

Zika transmission in Guatemala was officially recognized by the Government of Guatemala in late 2015. Since the beginning of 2016, Zika has been regularly identified throughout most of the country, as have other viral diseases borne by Aedes aegypti, such as dengue and chikungunya. Shortly after Zika was formally acknowledged by the government, a national-level committee was constituted with specialists in epidemiology, vector management, laboratory, behavior change communication, and health service delivery, among others. The Zika Committee meets on a weekly basis to review available data and discuss actions to respond to Zika at the national and subnational levels.

In addition to the Zika Committee, Guatemala has various elements in place that are critical to effective mitigation of the threat posed by Aedes mosquitoes. The national vector control program has developed guidance to steer vector control operations, and the chief entomologist of the program is well-qualified to oversee a countrywide approach to vector management. The number of staff at the central and subnational levels appears sufficient to adequately address the target vectors. A laboratory in Guatemala City can perform basic resistance tests and another can processes blood samples to detect Zika.

Yet in order to implement a credibly robust response to Zika, a number of key issues must be addressed.