You are here:Home›Resources ›Working with System of Health Accounts, 2011: Orientation, Discussion, and Next Steps 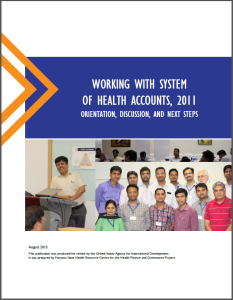 India conducted two National Health Accounts (NHA) exercises on data from 2001/02 and 2004/05. However, most health budgeting and spending in India is done by state-level government, which is why it was necessary to create state-level health accounts.

The HFG project in India hosted a three-day (May 18-20, 2015) orientation on estimating HA using the System of Health Accounts (SHA) 2011 methodology. Attending were representatives from Haryana and Punjab, who will develop the HA exercise in their states. In both states, peoples’ out-of-pocket expenditures are very high and health expenditure as part of budgetary expenditures is very low.

The orientation was presented by international and national experts to 20 participants from the Haryana State Health Resource Center (HSHRC); the Directorate General of Health Services, part of the Ministry of Health and Family Welfare; the School of Public Health Post Graduate Institute; the Public Health Foundation of India; and HFG India. Also attending were officials from Punjab and other guests.

The sessions were designed to give the participants an understanding of all the key components of developing HA; they included discussion sessions and group exercises. By the end of the orientation, participants had drafted comprehensive work plans and timelines for continuing the development of the HA exercise in Haryana, and had begun designing the HA exercise in Punjab.
The orientation was a first step in laying the foundation of building HA in Haryana and Punjab, and the knowledge the participants gained and the partnerships that were formed will hopefully lead to the completion of HA exercises in the two states by the end of 2015 and 2016, respectively.