As international financial support for HIV and AIDS programming stagnates in countries that have the funds to support these programs themselves, ensuring the sustainability of donor-established services is of paramount importance. Nigerian states are preparing to face the challenge of sustaining the current level of funding for the HIV and AIDS response. According to the National Agency for the Control of AIDS, Rivers State has the highest HIV prevalence out of 36 states in the country—a reported prevalence rate of 15.2% in 2012.

USAID/Nigeria, through the Health Finance and Governance (HFG) and Strengthening Integrated Delivery of HIV/AIDS Services (SIDHAS) projects collaborated with Rivers State Agency for the Control of AIDS (SACA) and other stakeholders in the state to develop their first ever resource mobilization strategy. This strategy is designed to stimulate government financing for HIV and AIDS programs in the state, outlining potential funding sources. 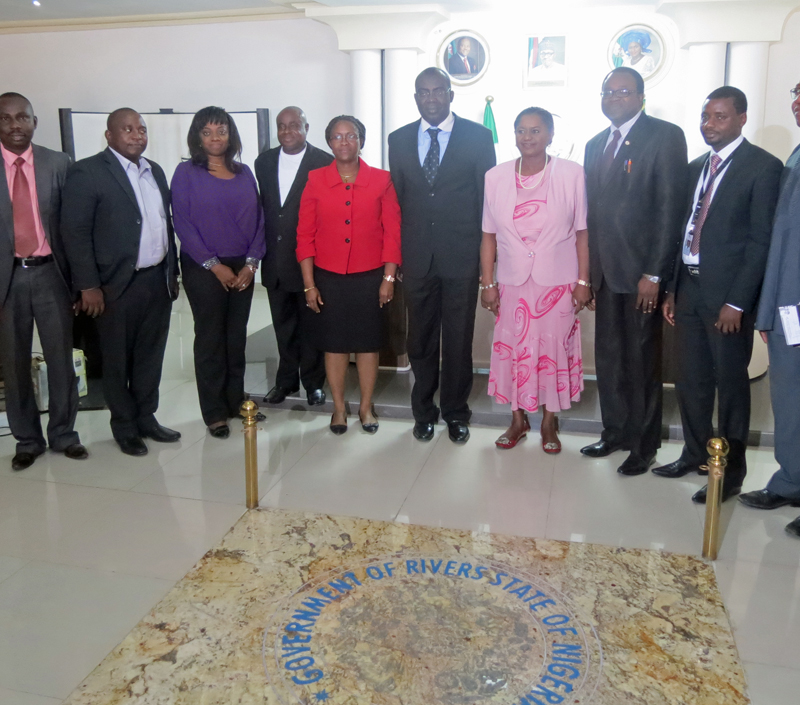 Developed with input from a prior workshop, the resource mobilization strategy was officially presented to the Deputy Governor of Rivers State, Dr. Ipalibo Baniogo, by Mrs. Caroline Wali, Permanent Secretary of the State Ministry of Health (SMoH), at the Government House in Port Harcourt on December 3, 2015. At the meeting, the Deputy Governor spoke about the Rivers State Government’s commitment to implementing both the transition plan and the resource mobilization strategy. Dr. Baniogo noted government interest in pursuing an integrated approach to health care delivery, identifying the World Bank’s Save One Million Lives facility as an example. She directed the Rivers SMoH to identify facilities with the capacity to offer integrated care in each of the five local government areas that lack HIV/AIDS treatment centers.

Dr. Baniogo spoke to  the importance of eliminating vertical transmission of HIV/AIDS—calling for the removal of barriers to access to antenatal care, especially in facilities still charging fees for antenatal care despite state government declaration that such services are free. The Deputy Governor charged the Permanent Secretary Mrs. Wali with the task of ensuring prompt release of funds to the SACA.

HFG is committed to collaborating with the state government to implement the strategy, and ensure uninterrupted service delivery during the transition and increased state funding to reduce the significant HIV/AIDS mortality burden.