Though Cross River State has moved quickly in establishing a State Health Insurance Scheme, the journey to the Cross River State Health Insurance Scheme (CRSHIS) has been a long one beginning with the 2015 decision by Nigeria’s National Council on Health (NCH) to decentralize the national health insurance scheme in an effort aimed at providing universal health coverage to all Nigerians.

Several states in the country are establishing institutional, policy, and legal frameworks to pass State Health Acts, thereby allowing the establishment of State Health Insurance Schemes (SHIS). Cross River State (CRS) has successfully enacted the laws and frameworks for its own SHIS, launching the mandatory health insurance scheme—CRSHIS or AyadeCare which is an informal name for the scheme given after the commitment of the Executive State Governor, Senator Ben Ayade.

An important part of launching the health insurance scheme is creating awareness among state citizens about what it means for them, not only in terms of their own health care but also the social and economic benefits for CRS and the country at a broader level.

Engaging the Media in Reporting on Health Insurance Policy

As Nigeria strives to make progress towards universal health coverage, it is important to recognize the potential strategic role of the media in promoting the benefits of healthcare financing reforms. The media plays an important role in society helping to create and shape public opinion. Recognizing this fact and providing accurate information and training to the media about health policy will go a long way in converting the public to “believers.”

After the enactment of the health insurance law that established the CRSHIS, CRS news and media outlets reported that citizens would now have “free health care”—a misrepresentation of the actual bill and meaning of health insurance. This shed some light on the gap in communication between the government, the media, and the public regarding public health policy. The USAID-funded Health Finance and Governance (HFG) project recognized this gap and immediately worked to address it by working with ministries of health and communication to engage the media in CRS to ensure the circulation of accurate information about the health insurance scheme going forward.

HFG’s engagement with the media is targeted at addressing this knowledge gap through training, advocacy, and collaboration. To deepen the understanding of journalists and media professionals on the basics of health financing and improve their knowledge of the state-supported health insurance scheme, HFG and state partners held a training workshop on the role of media and communication in reporting on health care financing reforms. 45 participants attended the workshop, including representatives from: Nigerian Television Authority (NTA) Calabar, Sun Newspaper, Cross River Broadcasting Cooperation (CRBC), and African Independent Television (AIT).

Outputs of the training included a strategic communications and campaign plan to build awareness of the health insurance scheme, including offering free airtime on CRBC to the State Government. CRBC reaches over 1.5 million citizens of CRS’s population of 3.7 million. 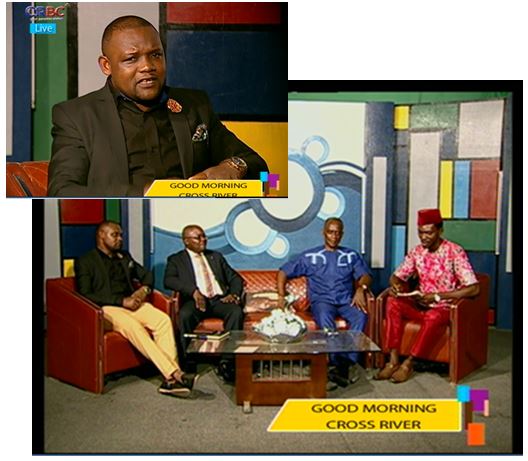 On March 9th 2017, CRBC hosted the members of the Core Implementation Committee (CIT) of the health insurance scheme on a live television program titled “Good Morning Cross River State”. It provided an opportunity to inform the public about ongoing health financing reforms in the State.

The station also hosted a radio program on March 20th, where the CIT discussed the benefits of the health insurance scheme, timeline for rollout of the scheme, the expected premiums, locations of registration centers, and services included in the insurance benefit package.

Similarly, another training participant—CRBC’s Ikom local government station—produced and aired a radio commentary on the importance of the health insurance scheme and why people should participate in it.

This engagement with the media is producing good results. A State Cleric who is pleased with the objectives of the CRSHIS said:

“From what I learnt from both the TV and radio program, it’s a way of planning for the future. Even though we Nigerians like to wait until we are close to the grave before we seek healthcare, but with the state health insurance scheme coming onboard, people can access healthcare even when they do not have money in the pocket at the time they are seeking health care”

To ensure continuous communication between the CRS media and also state media team HFG created a “WhatsApp” group – coordinated by the CRS Commissioner for Information and the Permanent Secretary, Ministry of Information. The group has contributed immensely to the media activities in the state targeted at promoting the benefits of the SHIS.

In April 2017,  in CRS, health financing and health insurance have been major topics of discussion in the political arena—especially around how resources will be mobilized to sustain the State Government in providing a health insurance program that aims to reduce the financial burden on people seeking healthcare. The  questions are being asked have spurred further important discussion including: funding for the scheme, collection of informal sector contributions, deductions from wages for members of labor unions, and whether participants will be restricted to using only public health facilities. Not surprisingly, people are also wondering if the scheme will succeed.

HFG will continue to support the state to ensure appropriate, timely, and clear communication of the health financing reforms to the population, while also promoting the benefits of AyadeCare for uptake and enrollment by all state residents.