You are here:Home›Resources ›Haiti Kicks Off Second NHA 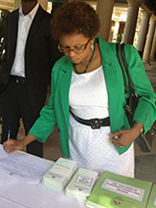 Haiti’s Ministry of Health recently disseminated the results from its first NHA at a workshop attended by more than 100 Haitian government officials, health partners, and donors. Minister for Public Health and Population Florence Guillaume emphasized the importance of the NHA results for informing health sector policy and priorities. She also announced that the Ministry will soon begin conducting its second NHA (2011/12) using the new System of Health Accounts (SHA 2011) framework. The HFG Project is working closely with the MOH to plan the second NHA and will support the MOH in carrying it out. HFG is collaborating with the Ministry of Health officials to prepare the survey instruments and to customize the SHA to the Haitian context. The Ministry of Health conducted the 2010-11 NHA on its own. Haiti’s Director General and the President of the Haitian Senate also attended the workshop.