You are here:Home›Resources ›Ethiopia Disseminates Fifth Round of NHA

Speaking before 120 people at the dissemination of Ethiopia’s fifth round of National Health Accounts (NHA), held April 10th in Addis Ababa, State Minister for Health Dr. Amir Aman pledged to make use of the new findings in the government’s policy making process. He urged partners throughout the health sector to use the NHA evidence to guide their decision-making, as well. He also stressed the government’s commitment to institutionalizing the NHA process. 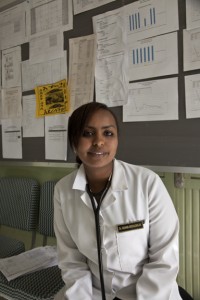 A doctor in Gondar, Ethiopia. Photo by David Page.

Although the NHA methodology has been used since the 1990s in low- and middle-income countries, its “institutionalization” – making the NHA a routine and active component of a country’s health system, and using NHA findings – is often constrained by country technical capacity and ownership. As a result, NHA institutionalization is a priority for many governments as well as USAID, the World Bank, and other partners.

The NHA methodology captures past health spending by the country’s public sector, private sector (firms, insurance companies, households, nonprofit organizations), and international partners (NGOs and donors). It also tracks the flow of funds from one part of the health system to another over a defined period of time, usually one year.

NHA summarizes that information in tables that showcase the magnitude of funding and flows of resources from financing sources to managers of resources, and then to health care providers and then finally to specific services and products delivered. In addition, NHA subaccounts track the magnitude and spending flow within priority areas, such as HIV/AIDS and malaria.

In this latest round of NHA, Ethiopia’s government tracked spending in five subaccounts ‒ HIV/AIDS, reproductive health, child health, tuberculosis, and malaria. The data was collected from 10,060 household surveys and 4,000 surveys of people living with HIV/AIDS, as well as information from institutions including donors, NGOs, and government (mainly from audited government expenditure accounts and parastatals) and private entities.

Dr. Amin said that the NHA exercise, which was supported by the HFG Project, is part of a larger effort to ensure “healthy and productive Ethiopians.”