You are here:Home›Resources ›Contributing to the Global Malaria Economic Evidence Base

Malaria is one of global health’s resounding success stories. The numbers speak for themselves:

But to achieve a malaria-free world, funding for cost-effective interventions and efficient malaria control programs must be sustained to preserve gains and reduce and even eliminate sickness and death due to malaria. Malaria program implementers and funders need economic evidence in order to advocate for continued resources and implement programs in a cost-effective way. 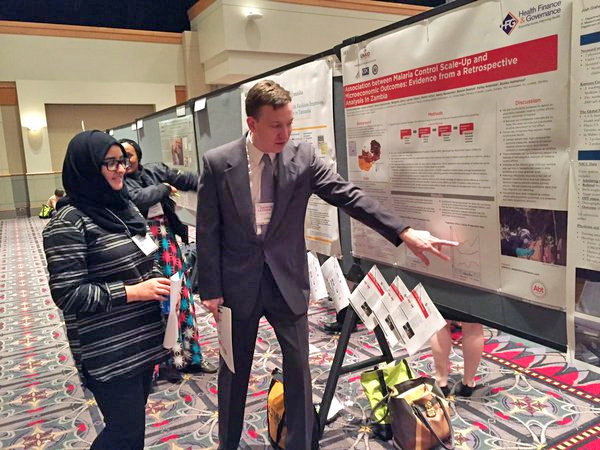 In addition to conducting research to convey the tangible impact of malaria control scale-up, HFG is collaborating with the President’s Malaria Initiative (PMI) to ensure that malaria economic research produced is targeting key questions that implementers and funders have. It is important that all stakeholders at the global and country level are involved in developing the malaria research agenda.

In November 2015, PMI and the Health Finance and Governance Project (HFG) hosted a consultative session on the Economic Impact of Malaria Control at the 64th Annual Meeting of the American Society for Tropical Medicine and Hygiene (ASTMH) in Philadelphia. The meeting brought together an array of stakeholders, including funders, researchers, and implementers, who expressed the need for increased knowledge sharing and coordination to improve the targeting and efficiency of research efforts, and the usability of results. Moreover, the group acknowledged the importance of involving the “users” of malaria economic research—implementers, programmers, and policymakers at the country level—in these discussions.

As a result of this session, HFG is supporting the development of a Community of Practice (CoP) aimed at facilitating communication among a broad range of stakeholders – including the producers, funders, and non-economist users of malaria economic research. The CoP will work in close collaboration with the Resource Mobilization Technical Working Group within the recently re-established Roll Bank Malaria Partnership.

HFG is also developing a research framework for malaria economic research, drawing on its research in Senegal and Zambia. The framework will be used by both funders and programmers to identify critical evidence gaps and areas of duplicative research initiatives, to prioritize future research, and to promote evidence-based policy, all of which can contribute to ending malaria for good.